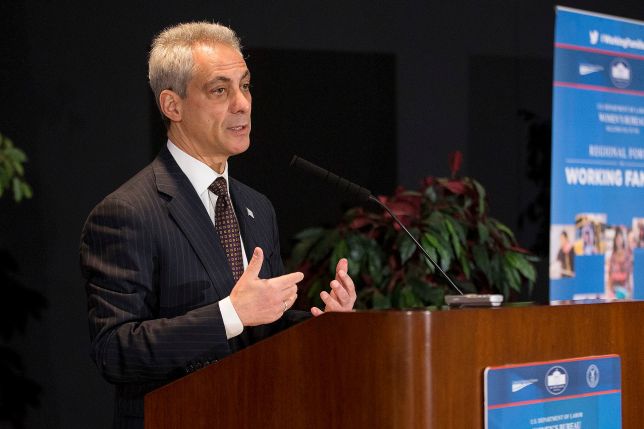 Rahm Emanuel is a Good Democrat:

In the first three weeks of Donald Trump’s presidency, mayors across the country became some of his most vocal opponents and vowed to fight his discriminatory executive orders. But there’s at least one city leader who wants to work closely with the new administration: Democratic Chicago Mayor Rahm Emanuel.

On Monday, Emanuel sat down with Attorney General Jeff Sessions to discuss “topics from public safety to public transportation.” According to the mayor’s office, Emanuel specifically asked for a federal crackdown on gun violence in the city.

“Public safety is a top priority for everyone, and over the course of the day the mayor reiterated his request for added federal resources including ex-offender programs, mentoring and increased federal gun prosecution in Chicago, as well as additional federal agents,” Emanuel spokesman Matt McGrath said of the meeting.

The request comes three weeks after Trump spewed false data about Chicago gun violence and threatened to send “the Feds” to “fix the horrible ‘carnage,’” and two weeks after the mayor replied, “Just send them.”

Instead of looking, say, at his punitive economic and social policies to try to find some answers for the wave of violent crime hitting Chicago’s south and west sides, the Democratic Mayor of Chicago would rather appeal to Donald Trump and his racist Attorney General to send in the feds and crack some skulls. Glorious bipartisanship, it truly is an end in itself.

The next time somebody asks you why liberals and leftists keep fighting with one another, one way you could explain it is to say that the people responsible for giving Chicago “Mayor Rahm Emanuel” are very angry that their 25 year stewardship of The Left in American politics is suddenly being called into question for reasons they can’t quite understand. That’s a pretty decent summary.

Hi, how’s it going? Thanks for reading; attwiw wouldn’t exist without you! If you enjoyed this or any other posts here, please share widely and help build our audience. You can like this site on Facebook or follow me on Twitter as well. Most critically, if you’re a regular reader I hope you’ll read this and consider helping this place to stay alive.

This site uses Akismet to reduce spam. Learn how your comment data is processed.