King Tut is still getting over the trauma of having his beard broken off and badly reattached with epoxy, so maybe it’s unfair to pile on the guy like this, but an Egyptologist at the University of Arizona named Nicholas Reeves is now accusing Tutankhamun(‘s tomb) of hiding the tomb of Nefertiti, the chief consort of Tut’s father, Akhenaten, and maybe/possibly Tut’s own mother. Reeves believes that high-res scans of the north wall of Tutankhamun’s tomb show the outline of a doorway. This, combined with the long-standing belief (going back to the tomb’s discoverer, Howard Carter) that Tutankhamun’s tomb is peculiarly small for a pharaonic burial chamber, leads him to believe that some other royal figure’s burial chamber lies beyond that wall.

Nefertiti is attested in several places in Ancient Egyptian sites, but she’s best known to Westerners for the striking bust of her that is the prized possession of the Neues Museum in Berlin: 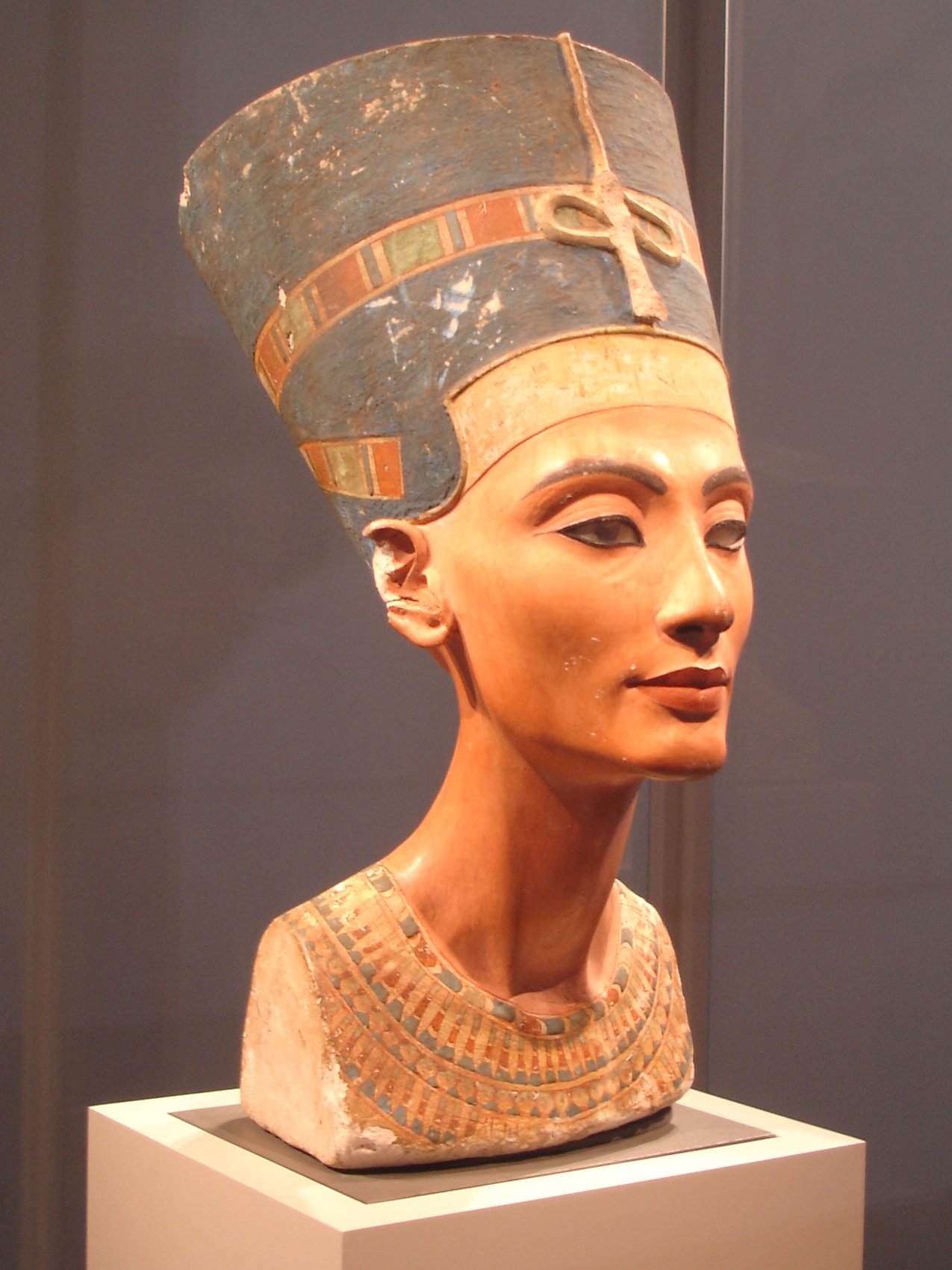 It’s believed that Tut’s mother was a full sister of his father, Akhenaten (don’t judge, but yeah). That would rule out Nefertiti, who was most likely not Akhenaten’s sister and may not even have been Egyptian by birth (one theory says that she was from the Mitanni, who controlled northern Mesopotamia and Syria and southeastern Anatolia in the 16th-14th centuries BCE). But if it is her tomb hiding behind the wall in Tut’s tomb, then it raises some interesting questions. As the chief consort of a pharaoh, Nefertiti should have been buried in Luxor’s so-called “Valley of the Queens,” where many consorts wound up. Instead she may be occupying half of Tut’s tomb in the “Valley of the Kings.”

Why? Well, between Akhenaten’s death and Tutankhamun’s accession there seem to be two intermediate pharaohs: Smenkhkare and Neferneferuaten. For a while Egyptologists apparently thought these were two names for the same person, and they weren’t sure if it was a man or a woman (either way some inscriptions suggested that he or she was involved in a romantic relationship with Akhenaten). Then they started to notice that the stuff about a romantic relationship with Akhenaten seemed only to be used with respect to Neferneferuaten, not Smenkhkare, and that while there’s considerable evidence to suggest that Neferneferuaten was a woman, Smenkhkare clearly seems to have been a man (Akhenaten’s son in-law, in fact).

Lots of stuff found in Tutankhamun’s tomb refers to this Neferneferuaten, including some artwork that seems to depict her as a co-ruler (with more ceremonial authority than would be afforded a chief consort) with Akhenaten. Nefertiti is depicted in these ways in other places. Now, Neferneferuaten might also be Akhenaten’s daughter (and Smenkhkare’s wife) Meritaten, but given the similarities in their depictions and their names, it seems more likely that Neferneferuaten was Nefertiti, who took a regal name upon her accession as a full-fledged pharaoh (perhaps as a regent for Tutankhamun). If it does turn out that Nefertiti’s been sharing a tomb with King Tut all this time, that would go a long way toward proving the “Nefertiti = Neferneferuaten” theory, since as a full pharaoh she would have been rightly accorded burial in the “Valley of the Kings.”

You’ve probably heard the stories about how Akhenaten (formerly Amenhotep IV) tried to change the Egyptian religion from polytheism to something more like monolatry (where believers acknowledge many gods but deem only one worthy or worship) or henotheism (where believers acknowledge many gods and deem all of them worthy of worship, but choose to focus worship on only one in particular), based around worship of the Aten, or sun disc. It’s even been speculated that the Aten cult influenced Judaism’s transition to monotheism, though that theory is pretty thin as far as I know. Anyway, Akhenaten’s new religion didn’t survive Tut’s lifetime; he changed his name from Tutankhaten to Tutankhamun because he reestablished (maybe not totally voluntarily) the pre-Akhenaten polytheistic faith as Egypt’s “official” religion.

Akhenaten’s experimentation with a new faith made him pretty unpopular among Egypt’s religious establishment after his death, and consequently there are a lot of details about that whole period (known as the “Amarna Period,” because Akhenaten had moved the capital from Thebes to the new city of Akhetaten, which is now known as Amarna) that aren’t clear because the authorities tried to excise them from the records. Even Ay, who probably managed Tutankhamun’s restoration of the old faith while he was serving as close adviser to/real power behind the young pharaoh, was excised from historical records because he was considered part of the hated Amarna Period. If Nefertiti’s tomb is sharing space with Tut’s, its discovery could help shed some more light on a very interesting period in Egyptian history.

Hey, thanks for reading! If you come here often, and you like what I do, would you please consider contributing something (sorry, that page is a work in progress) to keeping this place running and me out of debtor’s prison? Also, while you’re out there on the internet tubes, please consider liking this blog’s Facebook page and following me on Twitter! Thank you!

This site uses Akismet to reduce spam. Learn how your comment data is processed.